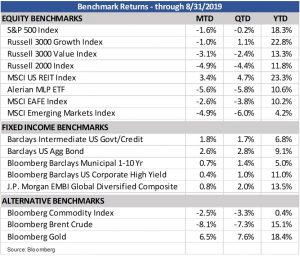 August was a choppy month for stocks. Half of the 22 trading days of the S&P 500 had moves greater than 1% (on the upside and downside). For the month, larger-cap U.S. stocks fell 1.6% and smaller-cap U.S. stocks dropped 4.9%. The volatility in August can be attributed to slowing global growth, contracting manufacturing indices, rising trade tensions between the U.S. and China, and rapidly falling interest rates.

Trade tensions escalated in August with the United States imposing 10% tariffs on another $300 billion of Chinese goods and formally accusing China of manipulating its currency. In response, China announced additional tariffs on $75 billion worth of U.S. products in August. The tit-for-tat trade situation—it may now be appropriate to call it a “trade war”—between the world’s two largest economies continues to drag on with a great deal of uncertainty around its duration, intensity, and ultimate outcome. 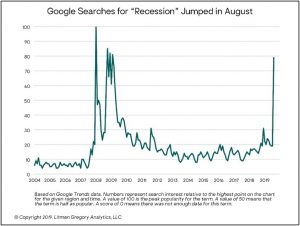 While the equity markets hate uncertainty, the bond market responded positively to the August slowdown. Interest rates continued to fall in August after the Federal Reserve cut interest rates at the end of July for the first time since 2008. The 10-year Treasury yield fell 50 bps to close the month at 1.5%. The sharp drop in yields was accompanied by an inversion between the 10-year and 2-year portion of the yield curve. Many in the market believe a yield-curve inversion is a recessionary signal—as it has preceded previous recessions and signals investors’ concern about the near-term prospects of the economy. While we have been highlighting the economic risks for a while, recession fears went “mainstream” after the curve inverted. As shown in the chart to the right, Google Search registered a huge spike in people Googling “recession” last month.

The continued fall in interest rates was a boon for the bond market with the 30-year bond now yielding under 2%.  In terms of credit, August saw only modest spread widening versus Treasuries and high yield was able to finish the month up 0.4%. The stability in the credit market is positive, not signaling either a liquidity issue or an impending recession. The year-to-date core bond returns are impressive. If the index can finish the year with a return above 10%, it would be the first double-digit return since 2002 and just the fifth double-digit return in the last 30 years.

Turning back overseas, growth is slowing at a faster rate as stocks in developed countries fell 2.6% on the month. A great deal of uncertainty remains around how the United Kingdom will deal with their upcoming departure from the European Union. Investors are also looking toward the European Central Bank’s September meeting for additional stimulus for the European economy. Emerging-market stocks lost 4.9% for the month, led by Argentina’s stunning 50% decline. In Argentina, markets declined, and the currency devalued after the leftist opposition candidate Alberto Fernandez beat the market-friendly incumbent Mauricio Macri in the presidential primary election.