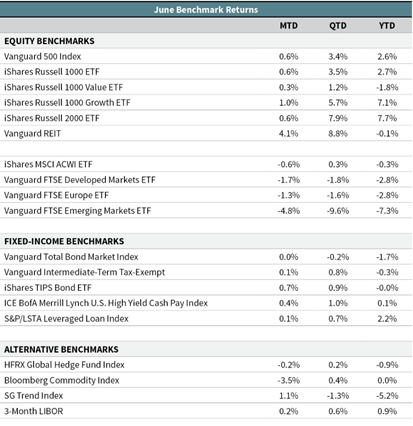 US stocks rose to the top of asset class performance charts with solid returns in the second quarter. Larger-cap US stocks (Vanguard 500 Index) gained 3.4%, but were outdone by smaller-cap stocks (iShares Russell 2000 ETF), which jumped 7.9%. The smaller-cap outperformance was driven by the market narrative that smaller companies are more domestically focused and therefore not as exposed to a strengthening US dollar or potential trade wars, both of which are assumed to be detrimental to larger-cap (multinational) company profits.

In addition to the currency effects, EM stocks were buffeted by on-again, off-again trade tensions between the United States and Europe, Mexico, Canada, Japan, and China—in other words, all its major trading partners. Fears of a trade war with China and the European Union escalated into quarter-end, with the entities engaged in vigorous trading of threats and counter-threats. Considering the sharp underperformance of EM stocks in the quarter, we’ll revisit our investment thesis and outlook for them below.

Moving on to the bond markets, in May, the benchmark 10-year Treasury yield touched the 3% level, hitting a seven-year high. Yields then fell back, ending the quarter at 2.85%, an 11-basis-point increase from the prior quarter-end. As such, the core bond index (Vanguard Total Bond Market Index) had a slightly negative return. Once again, floating-rate loan funds outperformed core bonds and generated positive returns, as they have every month this year. For the year, the core bond index is down nearly 2% and floating-rate loans are up roughly 2% (S&P/LSTA Leveraged Loan Index).

While there are always multiple, diverse factors impacting bond yields on a day-to-day basis, a primary underlying driver is Federal Reserve monetary policy (and the market’s expectations). Fed policy in turn is driven by the Fed’s assessment of the US economy, and specifically its “dual mandate” of price stability and full employment. To this end, with the economy growing above trend and the labor market tight—the unemployment rate fell to an 18-year low in May—the Fed continued its gradual path of tightening monetary policy. In June, as expected, it hiked the federal funds policy rate another 25 basis points to a range of 1.75%–2%. It also forecasted a slightly accelerated path of hikes over the next two years, which, if it comes to pass, would bring the fed funds rate to a range of 3%–3.25% by the end of 2019. Whether the economy can withstand that degree of tightening remains to be seen. 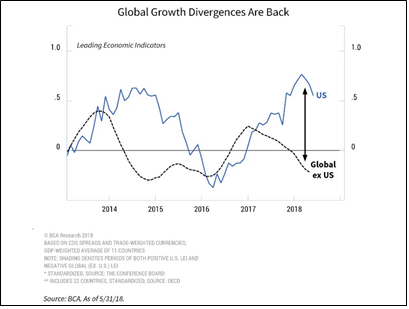 Beyond the strength of the US economy, the global economy remains in pretty good shape, with real GDP growth expected to be in the 3.5%–4% range. However, last year’s synchronized growth has decelerated and may have peaked for this cycle. BCA’s chart of leading economic indicators highlights the divergence in global growth. The US economy’s stronger relative growth along with a further widening of the yield gap between US and foreign bonds (i.e., diverging central bank policies) have been reflected in the rebound in the US dollar.

The recent dollar-strength trend may continue but there are fundamental reasons to expect the dollar may weaken longer term: a ballooning US federal budget deficit; a large US trade deficit; and the eventual convergence of central bank monetary policies—as other central banks start to raise interest rates, thereby shrinking the yield gap versus the United States.
Regardless, from a portfolio management perspective, we remain tactically agnostic on the dollar. Instead, we maintain our long-term diversified approach of having both dollar and non-dollar exposure—with the latter coming primarily from our foreign stock funds.

Our clients know we don’t invest based on three-month time horizons or short-term expected outcomes. A critical element of our investment process is the ability to maintain a longer-term (multiyear) perspective. Yet, many investors are also naturally curious to know “what worked and what didn’t” in any given period. So, with that in mind, we typically provide shorter-term updates on the key drivers of our portfolios’ performance.

All our globally diversified portfolios have meaningful allocations to international stocks. Our active portfolios also currently have a modest tactical overweight to EM stocks and are underweight to US stocks. This positioning was beneficial in 2017, as foreign markets outperformed US markets. But it has been a drag on returns this year, driven by the sharp performance divergence among these markets in the second quarter.

While we trimmed several international portfolios in the quarter, we remain overweight Emerging Markets as our longer-term market views remain unchanged. On a tactical (five-year) basis, US stocks are overvalued, offering very low expected returns across the macro scenarios we think are most likely. Put differently, at current prices and valuations we don’t believe we are being sufficiently compensated for US stocks’ downside risk. European and EM stocks currently offer a greater expected return premium over US stocks across most scenarios.

Our balanced portfolios continue to allocate to flexible bond funds and high-yield bond funds. In aggregate, these funds contributed nicely during the quarter and outperformed the core investment-grade bond index. Conversely, positions in EM sovereign debt negatively impacted returns. However, we continue to expect these non-core positions to outperform over the next several years. The performance of our actively managed core investment-grade bond funds was mixed versus the index for the quarter. 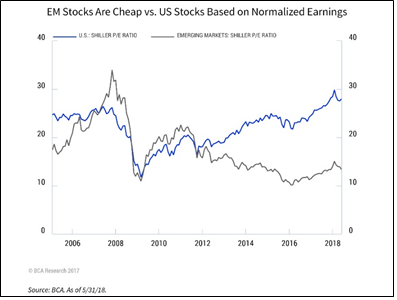 Our research continues to suggest attractive return potential for EM stocks relative to US stocks over our five-year tactical investment time horizon. We believe EM companies in aggregate are underearning relative to their normalized potential, and this is not fully priced into their stock prices. US stocks, on the other hand, are overearning and are expensive, implying very low five-year expected returns.

At the end of 2016, we added a significant overweight position (relative to our strategic weight) to EM stocks. As the global economy began firing on all cylinders for the first time since the financial crisis, our thesis quickly began to play out, with EM stocks gaining 32% last year. EM stocks bolted out of the gates in 2018, with an additional 11% return through late January. Since then, however, EM stocks have declined sharply, and returns are now in negative territory for the year.

These macro developments are indeed risks to EM stocks, at least in the shorter term. We also know that investor perceptions and over-reactions can create a self-fulfilling market reality for some period of time. However, these are not new risks to emerging markets.

President Trump campaigned on a promise of trade protectionism, and EM stocks sold off sharply in the days after his election. Ultimately, we thought it likely that cooler heads would prevail and a mutually damaging trade conflict would not ensue. As it happened, the market’s concerns about protectionism receded and EM stocks significantly outperformed US stocks. Those concerns have now reemerged, and with more concrete threats and reprisals. Our view, however, remains broadly the same. It is in the best interest of both the United States and China to negotiate a resolution and prevent trade skirmishes from becoming a trade war. However, the potential for a severely negative shorter-term shock to the global economy and risk assets (not just emerging markets) can’t be dismissed.

Aside from protectionism, investors appear to again be concerned with emerging markets’ external debt levels (i.e., EM debt held by foreigners). This concern tends to resurface when EM currencies are weakening, as it can make it more expensive for these countries to service their foreign currency debt. It can also contribute to a loss of confidence and capital outflow among lenders causing interest rates on EM debt to rise, which can reinforce the negative cycle. In a few countries (such as Turkey and Argentina) this does look to be a problem, but for most it’s not. According to Capital Economics, foreign exchange reserves in the emerging markets are, in aggregate, about the same size as their external debts, whereas they were only about 30% of the size of external debts in the late 1990s. So, EM countries now have better debt coverage. Second, at the aggregate country level, most EM debt is in local-currency terms. There is therefore less of a currency mismatch between borrowings and payments at the country level. 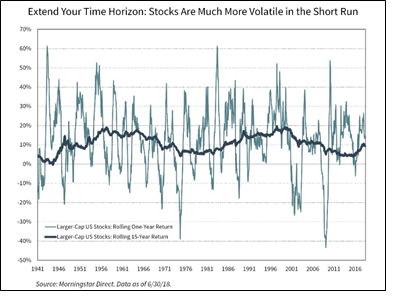 It is understandable that fears of a global trade war are rattling financial markets. The resolution of the current trade tensions is a meaningful uncertainty, with the potential to seriously disrupt the global economy at least over the shorter to medium term. President Trump’s unconventional negotiating approach adds an additional wildcard dimension. The process is likely prone to several more twists and turns before things become any clearer. The bottom line is that nobody knows how it will all play out.

There are always risks and uncertainties when investing in equities that have the potential to cause significant shorter-term price declines. Whether it is a trade war, a geopolitical event, an unexpected economic shock, a monetary policy mistake, or innumerable other factors, stocks can deliver big losses, at least over shorter-term (one- to three-year) periods. Market corrections and bear markets happen. An investor must be able to withstand these drops, stay the course, and stick to their long-term.

Our globally diversified portfolios are positioned to perform well over the long term and to be resilient across a range of potential scenarios. Should the current trade tensions resolve, and the global economic recovery continue, we expect to generate good overall returns, with outperformance from our International holdings, active equity managers, and flexible bond funds. Alternatively, should a bear market strike, our portfolios have “dry powder” in the form of lower-risk fixed-income.

As always, we thank you for your continued confidence and trust. 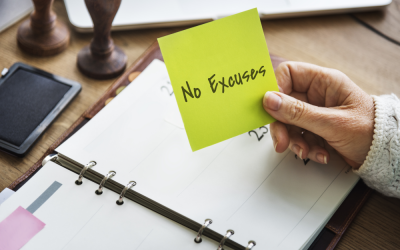