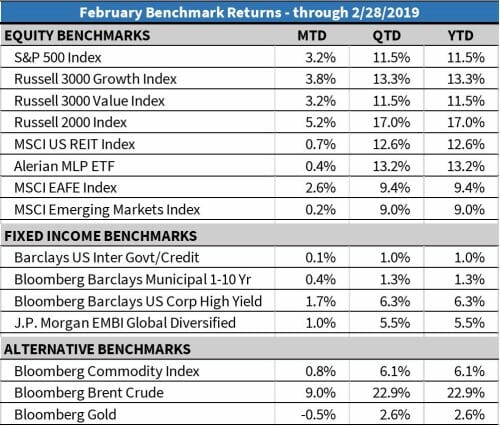 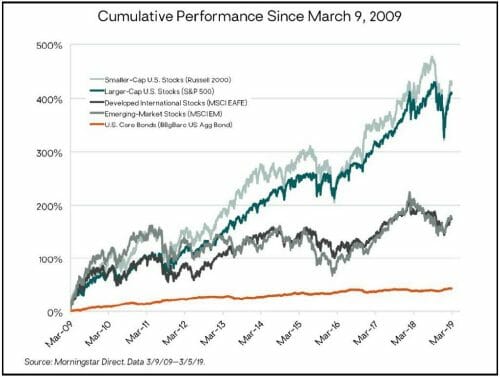 U.S. stocks continued their strong start to 2019. Larger-cap and smaller-cap stocks gained 3.2% and 5.2%, respectively, in February. Year-to-date returns already stand at 11.5% for larger-cap U.S. stocks and 17.1% for smaller-cap U.S. stocks. This month marks the 10th anniversary of the current bull market. On March 9, 2009, equity markets around the world bottomed and started their process of recovery. The returns from the bottom are pretty astonishing. Larger-cap U.S. stocks are up more than 400% cumulatively, or 17.7% annualized since then. The chart below shows returns for strategic asset classes since the start of this bull market.

Clearly, the leadership of U.S. stocks in the current bull market relative to international equities is stark. Despite this we believe investing in foreign markets makes sense from a strategic and tactical standpoint. Since March 9, 2009, international equities have provided a more than adequate level of absolute returns: MSCI EAFE is up an annualized 10.6% and MSCI Emerging Markets has gained 10.7%. If investors were asked in March 2009 if they would be happy with 10% annualized returns over the next decade, most would have gladly accepted those returns.

Speaking of foreign equities, developed international stocks gained 2.3% in February and are up 10% so far in 2019. Emerging-market stocks fell 0.4% last month but remain up 9.2% this year. International markets continue to face uncertainty over U.S. and China trade negotiations, slowing Chinese and European economies, and Brexit negotiations.

U.S. core investment-grade bonds increased modestly (up 0.1%) in February and remain in positive territory for the year. Both U.S. high-yield and emerging market debt performed well last month with gains of 1.7% and 1.0%, respectively. U.S. Treasury rates didn’t move much during the month—the 10-year rate has traded in the 2.6% to 2.7% range for most of the year. The short end of the Treasury curve remains inverted (i.e., six-month and one-year rates remain higher than two-year, three-year, and five-year Treasury rates). Bond market investors could be signaling a couple of things by inverting the short end, such as concerns around slowing economic growth or an expectation that the Fed will cut interest rates. Most investors focus on the inversion between the short-end (three-month or two-year rates) and long-term rates (10-year) as a predictor of recession. This area of the curve remains in positive territory.