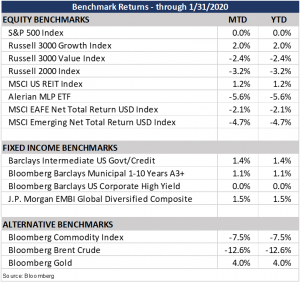 Global stocks fell in January after sentiment turned negative late in the month, largely driven by fears over the rapidly spreading coronavirus. Broader developed market indexes were up 2.5%–3% through January 20 but fell more than 3% through the end of the month as the severity and growing number of cases gained traction in the media. Investors started worrying about the potential impact the virus could have on the economy, particularly in China. China makes up a growing share of the global economy, now more than 17% of global GDP in U.S. dollars, up from 3.4% just two decades ago. The S&P 500 was flat for the month, while developed international and emerging-market (EM) stocks fell 2.1% and 4.7%, respectively.

The mounting fears led to positive gains for fixed-income markets. Interest rates in the United States dropped across much of the curve. Three-year U.S. Treasury rates fell nearly 30 basis points, while the 10-year rate dropped almost 40 bps. The U.S. Treasury curve inverted again during the last few sessions of the month—the 10-year rate closed the month lower than all shorter-term points on the curve. Lost in all the coronavirus news was an FOMC statement in late January where the Federal Reserve decided to maintain the federal funds rate at the same level (1.50%–1.75%). Market participants are expecting the Fed will continue to lower their target rate this year. At the end of January, the CME Group published a 90% probability of a rate cut by the December 2020 meeting, a 60% chance of two or more rate cuts, and zero probability of a rate hike this year. Falling rates resulted in a 1.4% gain for the U.S. core bond market, while the 7-10-year Treasury bond market returned 3.5%. U.S. high-yield bonds were flat in January while EM bonds were up 1.5%.

Coronavirus: Impact on the Economy and Markets

The World Health Organization has declared the new coronavirus a global health emergency, while in the United States it has been declared a public health emergency. Nobody on our team is an epidemiology expert—so it’s safe to say we don’t have unique insight into how this will play out from a health perspective.

So far, the markets have largely reacted as expected: the sectors affected (luxury goods, energy, transport, finance and commodities) have fallen disproportionately. So-called safe havens such as government bonds and gold have benefited, while corporate bonds in the investment-grade segment have hardly moved at all, and only in the high-yield segment has a more substantial yield expansion been discernible.

Hedge fund manager Seth Klarman has been quoted saying that “investing is the intersection of economics and psychology.” From an economic standpoint, the new coronavirus is unlikely to have a lasting, long-term effect on global economies. Economic growth bounced back (or was largely unaffected) from other global health emergencies (e.g., SARS, bird flu, swine flu, MERS, Ebola, and Zika virus to name a few recent cases). These past health emergencies can provide a good base case; however, the Chinese economy plays a much larger role in the global economy. In addition, the Chinese government’s response to control the coronavirus’s spread has been much more extensive than in the past and therefore likely to have a bigger near-term negative economic impact.

In addition to business shutdowns, quarantines, and travel restrictions, the Chinese government is responding to current events with additional monetary stimulus—which we’ve seen have a positive effect on markets in recent years. The People’s Bank of China has said it will inject upwards of $173 billion of liquidity into the markets and provide credit support to companies affected by the virus. Fiscal stimulus to support the Chinese economy is also likely, as happened during the SARS outbreak.

From a psychological standpoint, investors tend to overreact in both directions. When fear and panic take hold, investors will overshoot on the downside. If the new coronavirus doesn’t have a meaningful impact on the long-term economic prospects, further selling and cheaper prices would increase expected future returns and could result in an opportunity for investors with a long-term outlook.