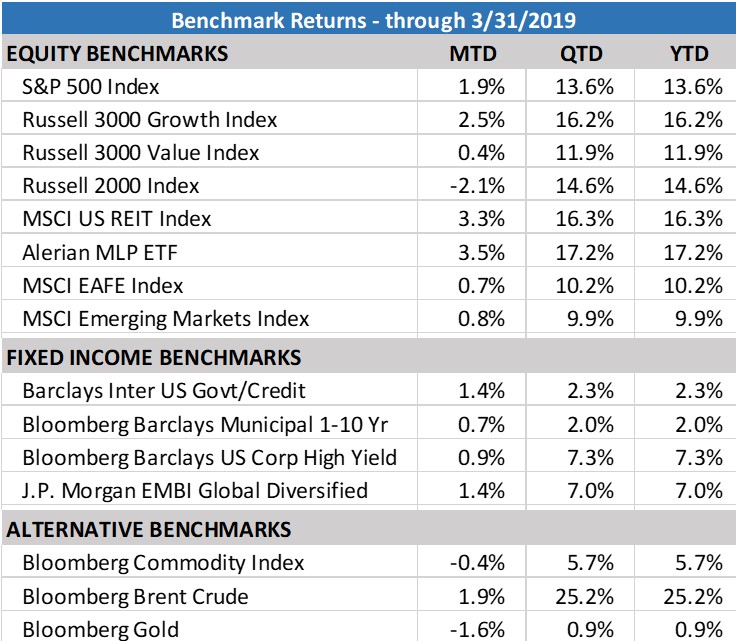 The first quarter was an unusually strong period for equities. It also marked a striking reversal from the end of 2018. After posting their worst December since 1931, U.S. stocks surged to their best January since 1987, followed by further gains in February and March. Larger-cap U.S. stocks gained 13.6% for the quarter, placing it in the top decile of quarterly market returns since 1950. As a reminder, last year’s fourth quarter 14% drop was a bottom-decile dweller. Once again, the markets surprised the consensus and demonstrated the folly of trying to predict short-term performance. Investors who bailed out of stocks during the year-end selloff experienced severe whipsaw as the market rallied.

Foreign stocks also rebounded sharply in the first quarter. Developed international markets gained 10.2% and European stocks were up 12.9%. Emerging-market (EM) stocks rose 9.9%, after holding up much better than U.S. stocks on the downside in the fourth quarter of 2018. 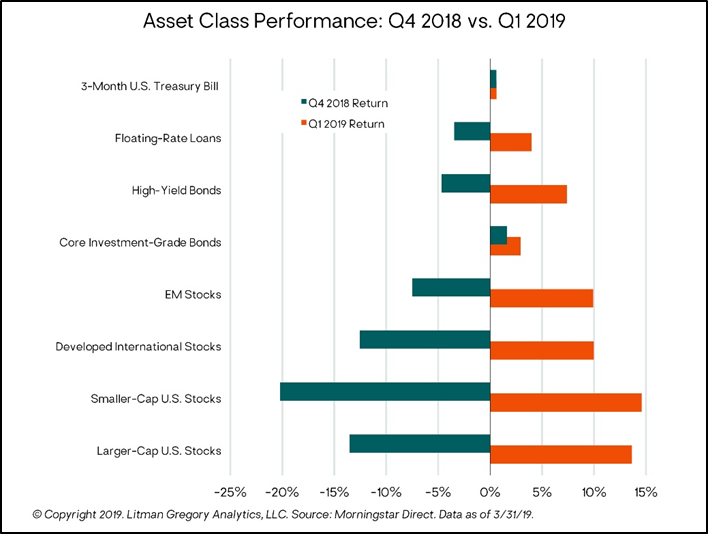 Fixed-income markets were also strong. High-yield bonds gained 7.3%, EM bonds were up 7%, and invest ment-grade bonds rose 2.3%. The 10-year Treasury yield fell to 2.39% during March, its lowest level since December 2017.

What Caused the Rebound: The Fed not the Fundamentals

The key catalyst for the rebound in equity markets was a significant shift in the Federal Reserve’s stance on monetary policy. In late December and throughout January, the Fed became much more dovish. After hiking interest rates four times in 2018, including at their mid-December meeting, and indicating further tightening would occur in 2019,

Fed officials suddenly reversed themselves. They emphasized they would be “patient” and pause any further rate increases. In early January, Fed chair Jerome Powell said the Fed could also slow down or stop shrinking its balance sheet of bonds purchased during quantitative easing. This came just two weeks after saying the Fed’s balance sheet reduction program (quantitative tightening) was “on autopilot.” The U-turn in Fed policy was music to the ears of the financial markets, which had become concerned about ongoing policy tightening in the face of slowing economic growth in the United States and abroad. 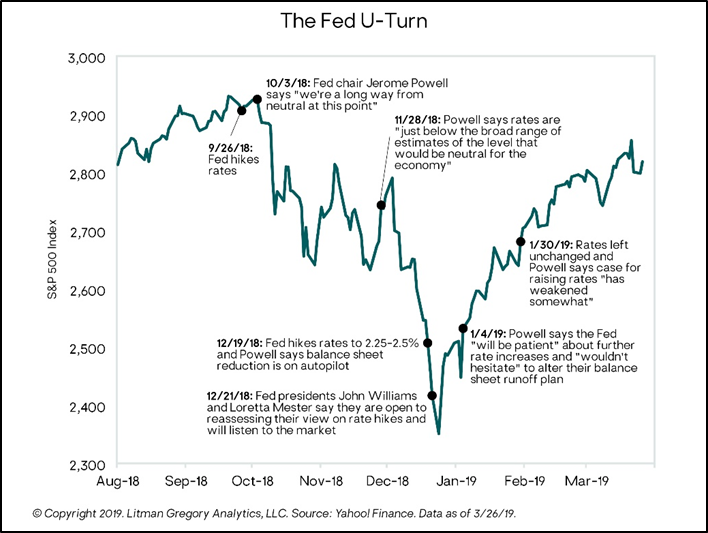 There were other positives for the markets as well: The federal government shutdown, which had started to weigh on sentiment, ended in late January. Signals from the U.S.-China trade talks turned more positive, although far from anything definitive. The likelihood of a “hard Brexit” also seemed to wane, but again, there is much to be resolved.

In sum, the market rebound was due more to improving investor sentiment and risk appetite—caused largely by the shift in Fed monetary policy—than any meaningful improvements in underlying economic or business fundamentals.

In fact, most economic indicators show a continued deceleration in global growth this year. For example, as reported by Ned Davis Research, the OECD’s composite economic leading indicator fell for the 16th straight month in January to its lowest level in nearly a decade. Other broad global economic indicators, such as BCA’s Global Leading Economic Indicator and Citigroup’s Economic Surprise Index reflect similar headwinds.

The U.S. economy is in better shape than most, but even here growth expectations have been coming down. At its Federal Open Market Committee (FOMC) meeting on March 20th, the Fed downgraded its median GDP growth estimate to just 2.1% for 2019 and 1.9% for 2020, citing the effects of economic slowdowns in China and Europe, fading stimulus from 2017 Trump tax cuts, and ongoing uncertainty around Brexit and trade policy.

It’s also worth noting that two days after the Fed’s March announcement, the 10-year Treasury yield fell to 2.44%, causing an inversion in the yield curve between the 10-year Treasury and the 3-month T-bill, which yielded 2.46%. A persistently inverted 10-year/3-month yield curve has been a consistent leading indicator of recession in past U.S. economic cycles, although the lead time has been variable and lengthy—anywhere from four to 16 months prior to the onset of recession. 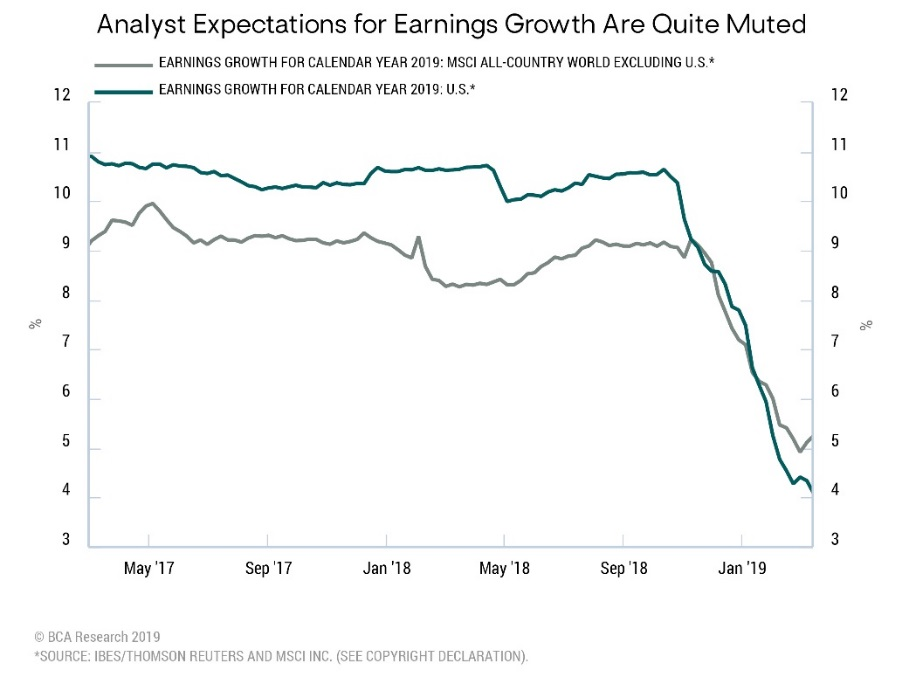 Besides the indicators of a slowing economy, U.S. corporate earnings growth expectations have also continued to decline, albeit from unrealistically lofty levels last year. The chart to the right from BCA shows 2019 consensus earnings-per-share growth estimates for the S&P 500 dropping from 12% (as of 12/31/18) to just 4.1% as of mid-March. Even with the Fed now on hold, earnings growth will need to improve for stocks to appreciate meaningfully from current levels, given their sharp rebound in the first quarter and high valuations.

Looking Ahead: Reviewing our Performance Expectations Across Different Scenarios

It certainly feels better to see strongly positive portfolio performance this quarter compared to the losses in the fourth quarter of 2018. But just as we wouldn’t extrapolate last year’s losses when looking out over the coming years, it’s equally important to temper our expectations on the upside after this quarter’s strong rebound.

Looking out over the next year or so from this point in the economic and market cycles, we see the potential for either of two quite different macro scenarios to play out: (1) stabilization and improvement in global growth; or (2) continued declining growth resulting in a U.S. and global recession.

Most economists agree that China and the United States are key to whether scenario 1 or 2 happens. It is clear the Chinese government is once again trying to boost their economy via fiscal and monetary policy (including tax cuts, lower interest rates, and expanded bank lending), after trying to reduce some of the debt-related excesses during the prior two years. (This deleveraging effort has been the key driver of China’s recent growth slowdown.) It is not yet clear if they will be successful, as these policy changes flow through to the economy with time lags and uncertain impacts. But there is some evidence, such as a rebound in credit growth, that the tide may be turning. A revival in Chinese growth would have positive ripple effects across the global economy. It would benefit other emerging markets and Europe in particular, as China is a major importer of their goods. Meanwhile, the U.S. economy, while weakening, doesn’t seem to be in imminent danger of slipping into recession.

Scenario 1: We have a lot of respect for the Global Investment Strategy team at BCA Research. They believe a global growth rebound is likely in the second half of 2019. They further note that the U.S. dollar, as a safe-haven currency, typically moves in the opposite (countercyclical) direction of global growth. When growth is weakening, the dollar tends to strengthen (as it has over the past year) and vice versa. In this scenario, they expect a depreciating dollar to further boost foreign market returns for U.S. dollar–based investors. BCA concludes, “This will create an excellent environment for international stocks—EM and Europe in particular.”

Given our tilt to these markets, this scenario would be positive for our portfolios. A rebound in growth would also benefit our non-core fixed income positions. We’d expect mid- to upper-single-digit returns from them. Lower-yielding core bonds would underperform. Our investments in lower-risk alternative strategies should also produce solid absolute returns better than core bonds. But we’d expect them to lag the strong equity markets.

Depending on the strength of the market rally in this scenario, we would expect to eventually reduce our portfolio’s equity- and credit-risk exposure as the prospective returns from these riskier asset classes become less attractive and the likelihood increases of this bullish market cycle coming to an end. The latter could be triggered by a resumption of Federal Reserve monetary policy tightening in response to rising inflation.

Scenario 2: On the other hand, it is possible the U.S. economy is already headed for recession, due to the contractionary effects of Fed tightening over the past two years, along with the negative impact of trade tensions, tariffs, and other geopolitical depressants, such as Brexit uncertainty.

We know from history that equity bear markets are more severe (deeper and longer) when concurrent with a U.S. recession versus when there is a global economic downturn or some other macro shock not accompanied by a U.S. recession. Even though we believe foreign stock markets are not overvalued they may fall more than U.S. stocks in a bear market because of their greater exposure to economically sensitive (cyclical) companies. We’ve taken this potential downside into account in our portfolio construction.

While stocks would get hit hard, we’d expect U.S. core bonds to be positive in this recession scenario, driven by disinflation and falling interest rates. That is why we maintain meaningful exposure to core bonds in our more conservative portfolios. But we also allocate to other higher-yielding income strategies, because the medium-term expected return for core bonds is quite low. This is another “shorter-term-risk for medium-term-return” tradeoff we believe is attractive and prudently allocated to as part of our overall portfolio construction. But these “non-core” income positions would likely register at least modest shorter-term losses in a recession versus core bonds’ gains.

Altogether, we’d expect our growth portfolios to be down in this scenario. As an investor it’s crucial to be comfortable with the market risk expectations for one’s portfolio. Those thresholds will surely be tested at least a few times during an investor’s lifetime.

The first quarter of 2019 was certainly a nice change from the last quarter of 2018, but we remain prepared for renewed market choppiness as the economic cycle moves closer to a downturn. On the positive near-term horizon, the Fed’s policy U-turn combined with China’s economic stimulus may enable the cycle to extend for another few years. If so, we have exposure to a wide range of investments that will particularly benefit, such as global equities with an emphasis on international stocks, flexible income, and higher yielding, credit sensitive funds.

On the other hand, there are both macroeconomic and geopolitical risks that threaten to end the cycle sooner than later. Our holdings in core bonds and lower-risk hybrid strategies should perform well when a recessionary bear market strikes. And we would then be in position to tactically add back to riskier asset classes, such as U.S. stocks, at lower prices and higher prospective medium-term returns.

We don’t have conviction predicting which shorter-term scenario will play out. Of course, we’d prefer to see global growth rebound with continued strong portfolio performance. But as always, it is wise to be prepared (mentally, emotionally, and financially) for shorter-term downside and negative market surprises. No matter what the future brings, maintaining a healthy patience and perspective, and sticking to one’s investment discipline, is necessary for long-term investment success.

We construct and manage portfolios to meet our clients’ longer-term goals. This means successfully navigating and investing through multiple market cycles, not just the next 12 months. We believe our portfolios are positioned to generate attractive returns over the next five to 10-plus years (i.e., the medium to longer term) and to be resilient across a range of potential shorter-term scenarios. It’s worth reiterating that despite our lower U.S. stock allocation, the portfolios are not without risk, stemming from our larger allocations to foreign equities as well as some of our non-core fixed income investments. In the event of a global bear market, we will experience short-term portfolio losses. But extending our time horizon beyond the short term, we believe we are being well compensated for the risks we are taking in those areas, while maintaining a well-diversified, balanced, and still somewhat defensive overall posture.

As always, we appreciate your trust and confidence in Argent Trust, and we work hard every day to continue to earn it.

Certain material in this work is proprietary to and copyrighted by Litman Gregory Analytics and is used by Argent Financial with permission. Reproduction or distribution of this material is prohibited and all rights are reserved