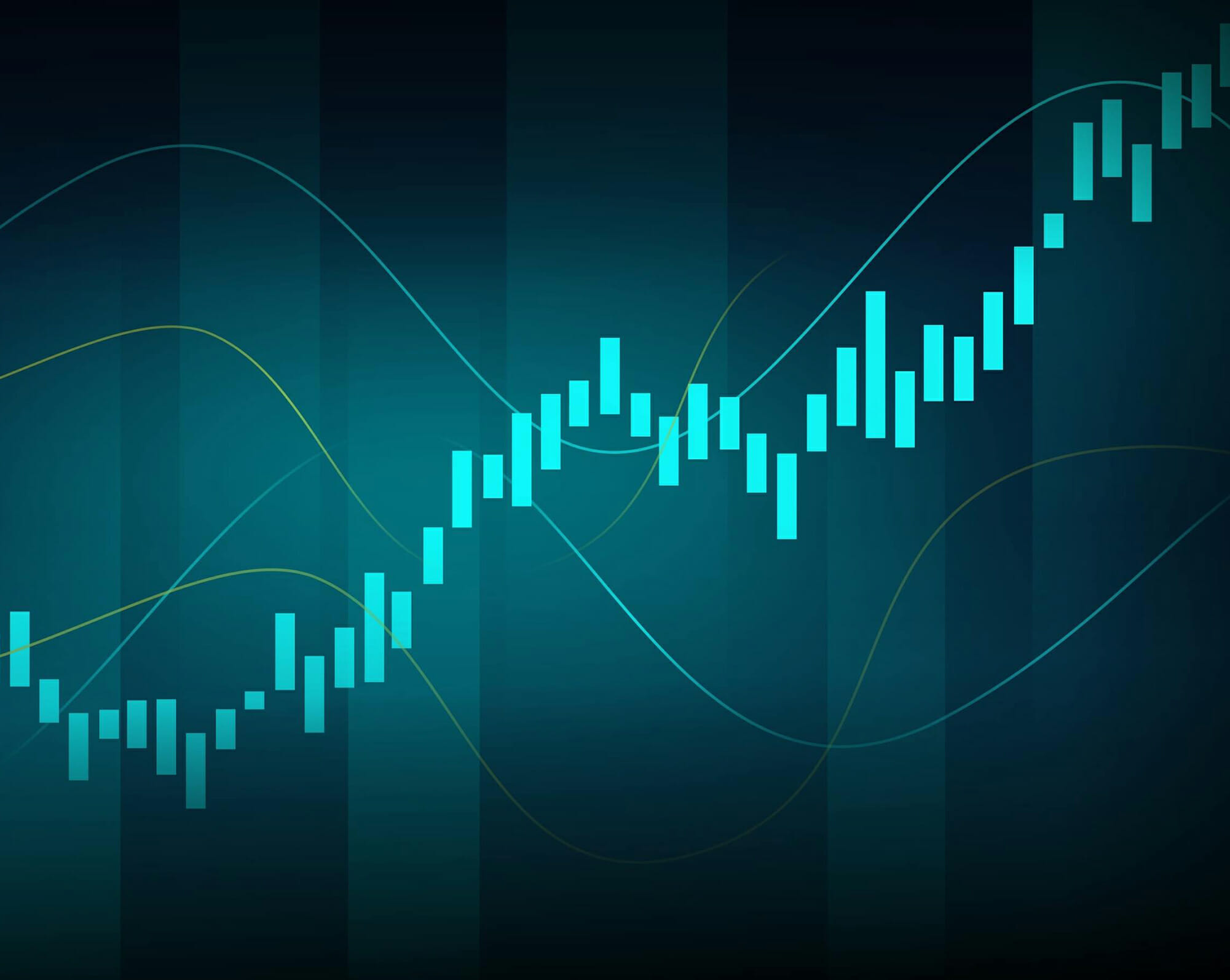 • The FOMC has signaled that it will continue to raise the overnight rate over time, indicating another 175bp by the end of this year with an additional 25-50bp in 2023

• The FOMC began “quantitative tightening” in June, meaning that money from maturing bonds in their balance sheet will no longer be reinvested up to certain caps

• Inflation remains at levels not seen in forty years due to COVID-disrupted supply chains, product and materials shortages, and an unprecedented demand impact following historic fiscal and monetary stimulus activities. Geopolitical tensions arising from the Russian invasion of Ukraine have exacerbated the situation

• Despite world bond yields rising, U.S. Treasury (UST) yields are among the highest in the developed world

Below are select Bloomberg fixed income index returns thru Q2 2022 and year to date: 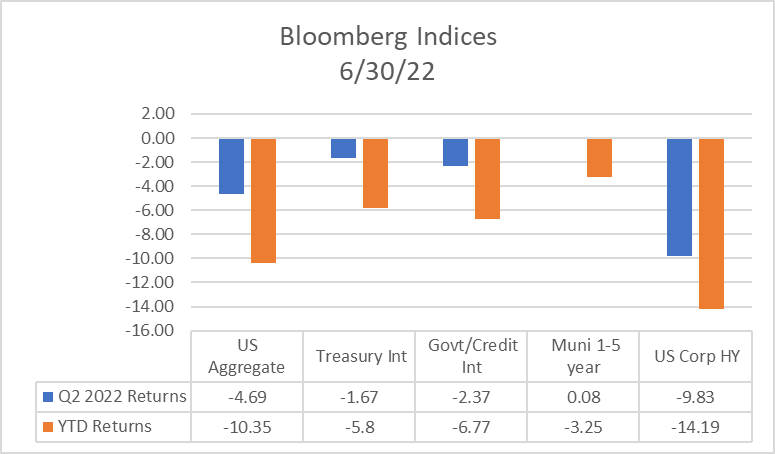 The Fed
Immediately following the FOMC meeting in mid-June, Fed Chair Jerome Powell announced a Fed funds rate hike of 75bp, the largest single increase since 1994. The most recent rate increase came on the heels of a report, the Friday before the meeting, that CPI had risen to a new high of 8.6%. The magnitude of the rate increase was a welcome surprise to financial markets as Powell had stated just six weeks earlier a move as much as 75bp was “not on the table.”

Over the course of Q2, the front end of the US Treasury yield curve flattened considerably as the yield on the 6-month US T-bill increased from 1% to 2.50%. The 2-year ranged widely from 2.33% to as high as 3.44%, closing the quarter at 2.88%. The 10-year range was very similar to the 2-year, ranging from 2.33% to 3.49%, ending the quarter at 3.01%. Treasury yields were so volatile during the quarter that the MOVE index, which measures the volatility of US Treasury securities, spiked to levels that have not been seen since the height of the global financial crisis in 2009.

The hawkish shift in Fed accommodation since late last year has contributed to a material tightening of financial conditions, including appreciation of the US Dollar, a jump in mortgage rates, and a significant drop in equity prices. The housing market reacted quickly to the increase in mortgage rates and residential investment appeared to have softened noticeably in the most recent quarter.

Municipal Bond Mayhem
Often considered one of the safest fixed income asset classes, municipal bonds experienced one of the worst first half-year periods in history. The catalyst for the sell-off was over $80 billion in redemptions from municipal bond mutual funds and ETFs through mid-June, as investors sold shares amid losses from rising interest rates. In general, credit quality in the municipal market remains quite high, and we are recommending tax exempt municipal bonds for clients in high tax brackets given the current attractiveness of yields compared to comparable US Treasuries.

Overseas
Foreign bond yields increased materially during Q2 as several foreign central banks followed the Fed’s lead and have begun to telegraph tighter monetary conditions in response to inflationary pressures. Below, in the “Yld” column, are 10-year bond yields from several foreign countries (sorted from low to high) as of the
end of the second quarter 2022. The continued wide disparity between the yield of the German Bund (the German ten-year note- often considered a proxy for European yields) at 1.33% compared to the U.S. ten-year note at 3.01% is indicative of differing economic conditions and divergent central bank monetary protocols. The high relative yield of U.S. Treasuries and other high-quality domestic fixed income sectors continued to draw a great deal of support from foreign buyers during the second quarter. 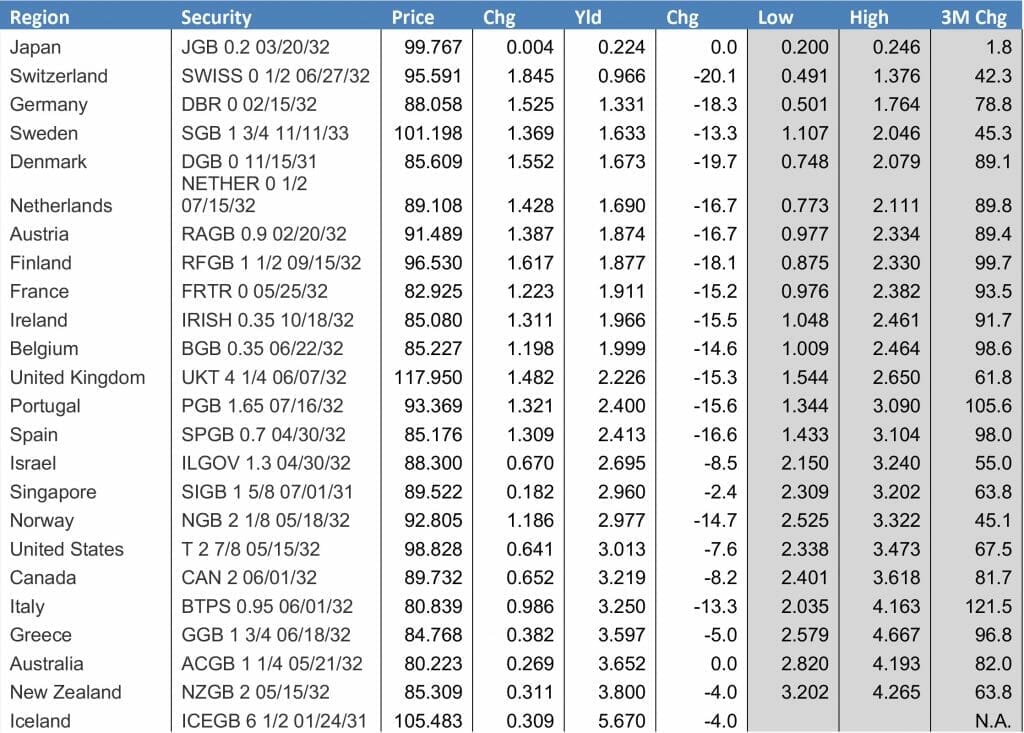 Even with a material month-end rally in June, the first half of 2022 experienced the worst returns in the US Treasury market in modern history. Consequently, there was “nowhere to hide” and all sectors of fixed income, even safe-haven short duration, suffered from acute volatility and negative returns. Despite the tumult, we believe the bulk of the move to higher rates following the Fed’s hawkish policy shift is behind us. Following such a dramatic re-set, certain sectors of fixed income have become a little more compelling from a cash flow perspective.

Because inflation remains persistent and the Fed’s resolve to fight higher prices remains fervent, the extent of additional rate hikes is currently unclear. In addition, much of the recent rise in inflation can be attributed to macro factors outside of the Fed’s control, such as hydrocarbon and grain prices, which can be partially attributed to the Russian invasion of Ukraine.

There is anecdotal evidence that certain parts of the supply chain are gradually “normalizing” and consumer demand is starting to cool, but real interest rates (returns above the rate of inflation) remain in negative territory. As a result, we continue to espouse a cautionary approach to fixed income, employing shorter duration and higher credit quality for safety and liquidity. We are also watching for yield curve inversions which have historically been fairly reliable harbingers of recession. We hope you will contact your portfolio manager, or any member of our fixed income team, to discuss our thoughts on fixed income, and to learn more about opportunities we believe are both appropriate and timely

Not Investment Advice or an Offer | This information is intended to assist investors. The information does not constitute investment advice or an offer to invest or to provide management services. It is not our intention to state, indicate, or imply in any manner that current or past results are indicative of future results or expectations. As with all investments, there are associated risks and you could lose money investing. Argent Financial Group is the parent
company of Argent Trust, Heritage Trust and AmeriTrust.

For more information about the commentary found in this newsletter, please contact: Sam Boldrick: sboldrick@argenttrust.com or Hutch Bryan: hbryan@argenttrust.com