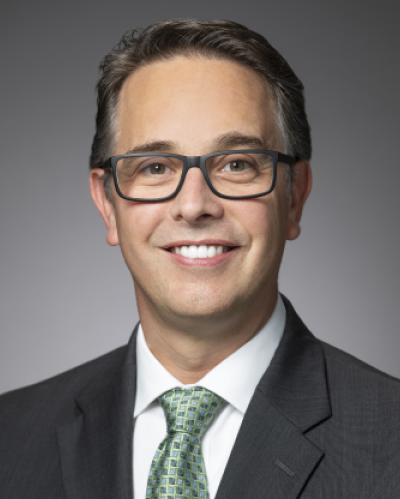 Michael P. Romero joined Heritage as Vice President and Relationship Manager in 2019 where he was responsible for assisting clients in a variety of areas, including trusts, probate and estate planning and administration. He was named President in 2022 where he is responsible for directing and managing the Oklahoma City team.

Mike came to Heritage from the Baptist Foundation of Oklahoma, where he served as vice president, trust counsel from 2001 until 2016, when he was promoted to senior vice president, chief development officer. While there, he was responsible for supervising the development team which was responsible for planned giving and institutional relations. Prior to this, he was an attorney in the Tax & Estate Planning Group of McAfee & Taft.

Mike served on the board of directors for the National Association of Charitable Gift Planner (formerly called the Partnership for Philanthropic Planning) from 2013-2016, and in October 2016, he served as the conference chair for the National Conference on Philanthropic Planning in Dallas, Texas. Mike also frequently speaks to groups on the topics of estate planning and charitable planned giving. He has spoken to hundreds of groups including presentations at the National Conference on Planned Giving (NCPP) 2013, Minneapolis, MN, and at NCPP 2014, Anaheim, CA along with various local planned giving councils across the country.

Romero is also an adjunct professor at the University of Central Oklahoma, where he teaches courses in estate planning and administration, and business law. In addition, he is an active member of Council Road Baptist Church.

Romero earned his bachelor’s degree in business administration from Oklahoma Baptist University and his Juris Doctorate degree from the University of Oklahoma College of Law. He is also a member of the Oklahoma Bar and recently earned the designation of Certified Wealth Strategist® through Cannon Financial Institute.

Romero and his wife, Laura, have been married 29 years and have four children. In his free time, he enjoys watching his kids play sports, reading a good book or exploring the Oklahoma terrain on a hike.

With over 30 years of expertise serving as sole trustee, co-trustee, successor trustee and directed trustee for thousands of clients, Argent can expertly serve the multi-generational wealth preservation and transfer needs of your family.