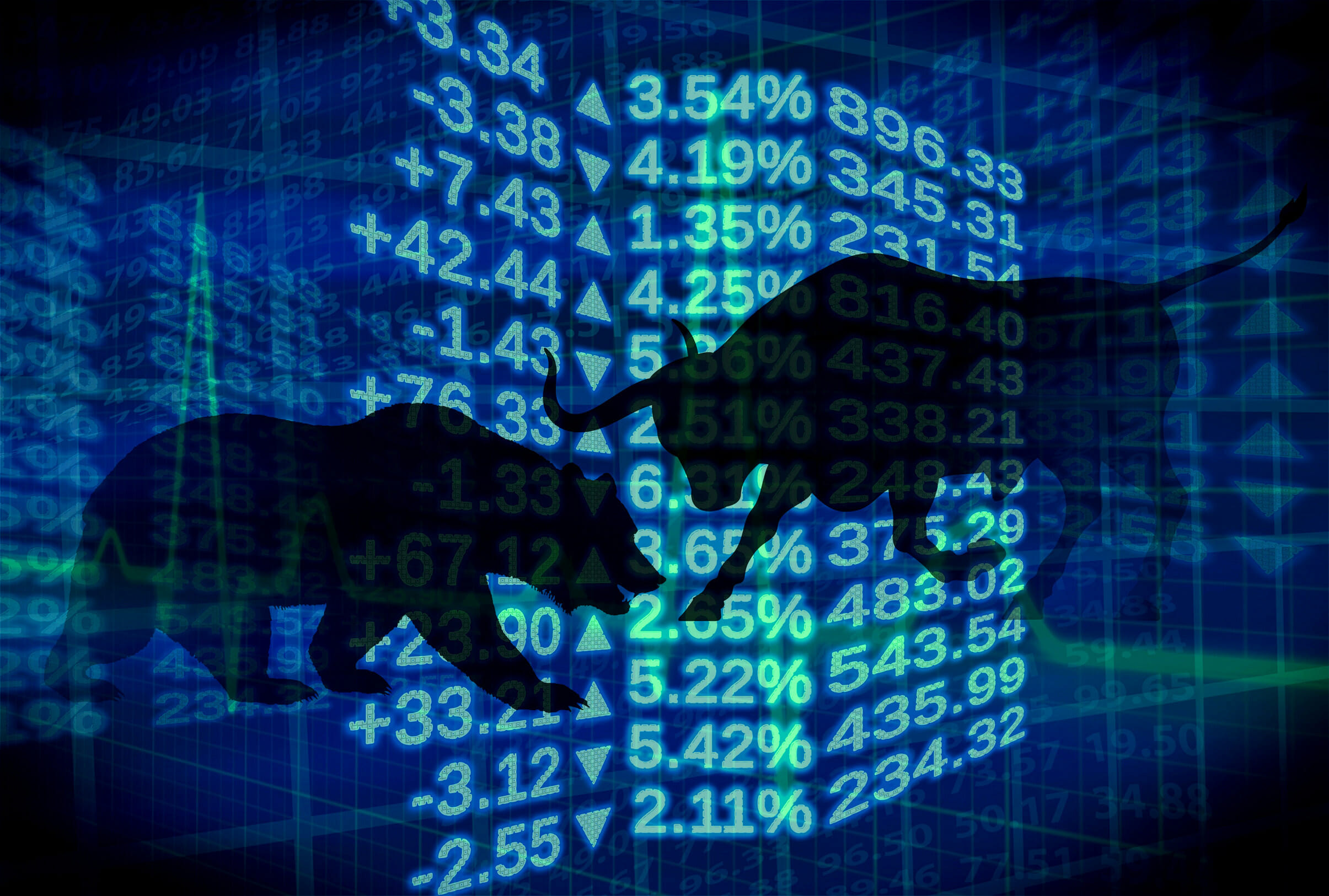 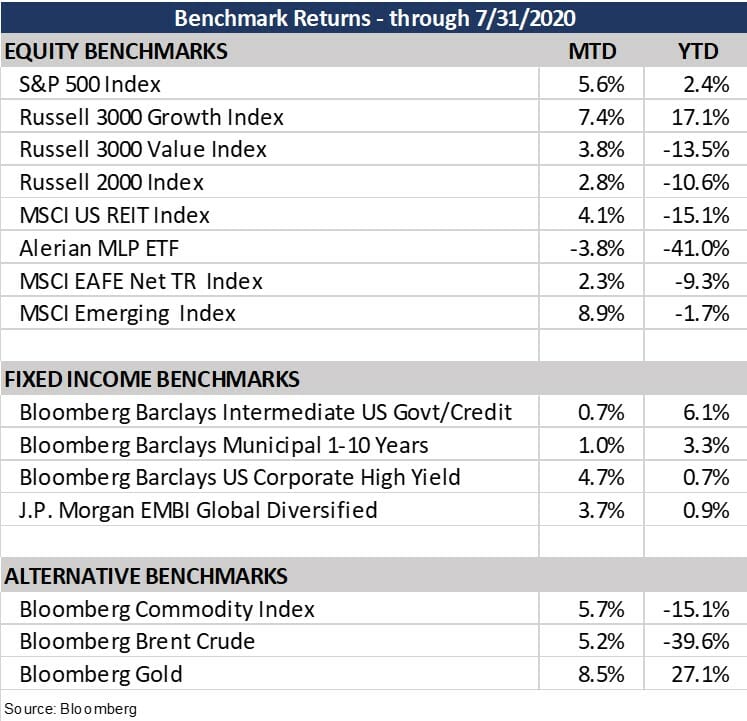 Global equities continue to march upward and dig out of the hole created in March. After falling more than 30% from the start of the year through March 23, the S&P 500 Index has rallied more than 47%. The 5.6% gain in July puts the S&P 500 back in the black for the year (up 2.4%). Smaller-cap U.S. stocks returned 2.8% during July—bringing their year-to-date tally to negative 10.6%. Emerging-market stocks led global equity returns in July with a gain of 8.9%. Developed international stocks were up 2.3%, boosted by a sharp 4% drop in the U.S. dollar index—its biggest one-month decline since September 2010.

Interest rates and credit spreads inched down modestly during the month. This helped the core bond index relative to the Treasury market and helped our flexible bond funds relative to core bond positions. The U.S. core bond market gained 0.7%, while the 7- to 10-year portion of the U.S. Treasury market returned 0.9%. Our more credit sensitive bond funds gained upward to 4% during July. Emerging market funds gained 3.7%.

The virus-induced shutdown of the economy resulted in its worst ever period, with real GDP falling 9.5% (year-to-year change) during the second quarter. For comparison, the worst quarter during the financial crisis was a decline of 3.9% during the second quarter of 2009. The path of the economic recovery will largely be dependent on the course of the pandemic. The latter only got worse and became more widespread across the country during July. But at this point, most states are hitting pause on reopening instead of going back into a full shutdown. This should soften the impact—along with additional fiscal spending support—so the second quarter will likely mark the worst from an economic standpoint. But the cone of uncertainty remains as wide as it has ever been. 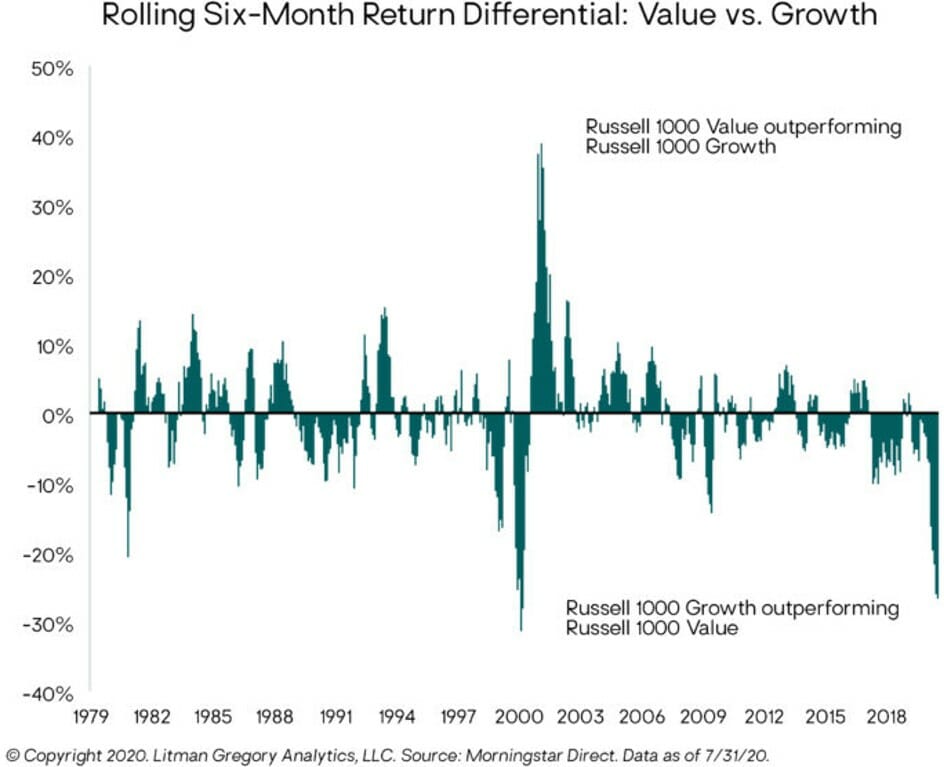 The obvious question is when and how can value win going forward given the current environment? While there are no explanations that we would identify with 100% certainty, below are scenarios which could turn the tide:

• Value could win if the interest rates rise. Although the Fed is pulling out all the stops to suppress interest rates by printing money and monetizing government debt (and even buying corporate debt), that is not a strategy with limitless potential.

• Value could also win if the economy grows more rapidly than expected, i.e. expanding the growth profile of more sectors. As growth rates accelerate for cyclical and other depressed companies, investors can then “value shop” on a comparison basis.

• Value can also win simply because of size. The popular benchmarks are dominated by bigger companies, most of which are considered growth stocks; the amount of growth needed to move the needle has become high, and the law of large numbers can make it difficult to meet expectations.

• Value could win if investors refocus on solid balance sheets and self-funding operations. A market that turns sour tends to refocus investors’ minds on sustainable franchises instead of aggressive possibilities.

From a psychological standpoint, investors tend to overreact in both directions. With U.S. elections coming in the Fall, this is, in our view, no time for complacency. That said, in our view value has rarely, if ever, been cheaper compared to growth. We have been able to prune and freshen portfolios at the margin over the last several months, and feel we are well positioned for whatever the markets may have in store for us.

Thank you for investing with us. Stay well.

This is the final article of a three-part series that provides guidance for plan sponsors who are faced with cash flow pressures at their business. (You can find the first article here and the second one here). The goal of the series is to offer alternative solutions...

Why a Corporate Fiduciary Could Be Right for You

In today’s world, estate planning can be an intense and complex process. These issues can be caused by many factors, such as federal and state tax laws and the types of property or assets a person owns. If you layer on unique family dynamics (e.g. a blended family,...