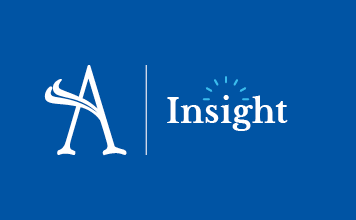 Our first article discussed the importance of financial planning, and our next article will explore how middle-aged couples can benefit from a dynamic financial plan. 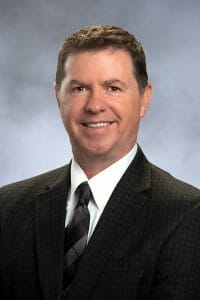 “A little ditty ’bout Jack and Diane, two American kids growing up in the heartland.”

So begins “Jack & Diane,” John Mellencamp’s classic 1982 hit song about two normal American kids thinking about their future. As we embark on a financial planning journey through the three life stages of young adulthood, middle adulthood, and senior adulthood, we analyze the life transitions that occur in the lives of Jack and Diane. While fictional, our couple typifies many of the life transitions that occur during Young Adulthood phase of life, and how dynamic financial planning adjusts to them.

When Jack and Diane first came into our office, they were young adults who met in medical school. Now they are in their early thirties and are both just out of medical residency – Jack in pediatric cardiology and Diane in radiology. While Diane was from an affluent Texas family, Jack was raised by a single mom in North Carolina. Both had recently accepted positions with a hospital system nearby and were invited to a financial orientation seminar we sponsored for new physicians. They liked our approach as fiduciaries who provided advice and counsel for a fee rather than being paid a commission on a financial product they purchased based on our recommendations. Still, they came to our first meeting a little skeptical about what they would get from financial planning because they were just starting out, with each earning a high income, but having zero savings and a lot of student loan debt.

Many young couples often face challenges learning how to manage their spending and saving within the constraint of their income. Dynamic financial planning is critical to success. Here is how we worked with Jack and Diane. 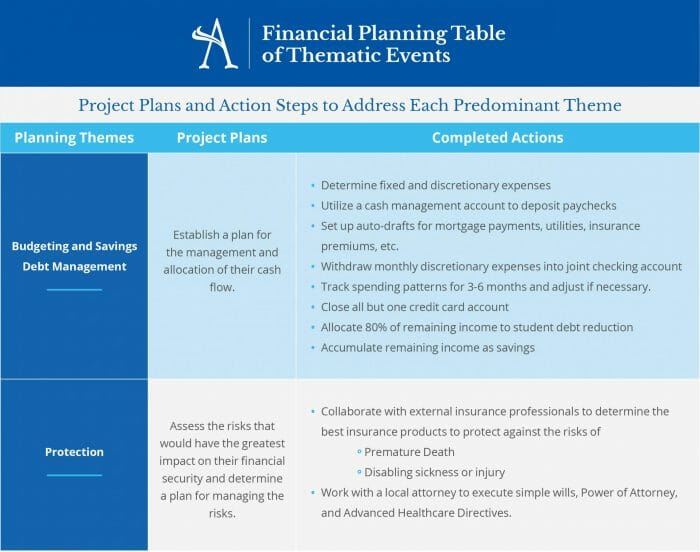 In the first year of our engagement with Jack and Diane, we help them focus on the next five-to-ten years rather than a lifetime of planning. Their incomes are on a vertical upward trajectory and they likely will have ample time to fund their retirement later in life, but there are shorter-term priorities, financial land mines and risks to address. Their biggest concern is the management of nearly $250,000 of student loan debt. Diane plans to work at least five years before they begin a family (with more than one child). Their combined income at nearly $500,000 annually is more than they have ever managed, but they have already taken the plunge on a new house with a $695,000 mortgage. They have also blindly accepted three new credit card offers with combined credit limits of $75,000, not understanding that the high limit will negatively affect their credit rating

Using the Financial Planning Table of Thematic Events, we addressed these major themes through a series of project plans and action steps to address each predominant theme.

Things were rocking along well for Jack and Diane. By the end of the first year, their student loan debt was reduced from nearly $250,000 to $175,000 and with rising incomes expected, we planned for the debt to be eliminated in only four more years. However, when they arrived at our meeting Diane shared the news that she was expecting twins. Her plan was to work until the seventh month of her pregnancy, then go on maternity leave until the twins were six weeks old before returning to work.

Based on those assumptions, we forecast their cashflow for the next 24 months. Other than pulling back on the student debt reduction for three or four months, we were confident they could get back on track and still meet their four-year plan to be free of their student debt.

Three months later, however, Jack called to say that for health reasons Diane had been ordered to bed so they would be without her income for six months rather than the three for which they had planned. The good news was that they had been living primarily on one income and the spending discipline they had developed in the prior year meant that it would not cause a major disruption in their lifestyle. We revised the debt reduction plan slightly and coordinated new action steps needed to address their circumstances.

Bearing the twins took a physical toll on Diane. She became anemic and though the twins were healthy, it took longer than expected for Diane to get her strength back. After a lot of thought and soul-searching, Diane decided to resign her position at the hospital and take a position with another radiological group that would allow her to work from home three days a week. This resulted in a 30% reduction in pay for her, but allowed her to spend more time at home with the twins, while maintaining her license and remaining engaged in her work. Two years later they had a third child.

In the meantime, Jack’s income increased substantially to where his salary was now close to $500,000 and he became a shareholder at his practice after the hospital sold it to a private group. Diane wanted to remain engaged in her field, but wrestled with the life/work balance. With two toddlers and a newborn, they decided to budget for a full-time nanny at a cost of roughly $1,000 per week. Two years later, at age 37, Diane became a self-employed contractor and was able to earn roughly $150,000 per year working part-time at home reading radiology images from around the world. Looking back over the previous five years, we addressed several themes and action items for Jack and Diane as they experienced these transitions.

•  Celebrated the payoff of student loans in year seven, three years later than planned, but paid off, nonetheless.

•  Increased the life insurance coverage on Jack and Diane to $3 million to insure sufficient resources for either surviving spouse to provide care for the children until their independence.

•  Increased Jack’s disability insurance coverage to the maximum for which he could qualify.

•  Updated their wills to include trusts for the care of a surviving spouse and dependent children.

•  Began maximizing contributions to Jack’s employer-sponsored retirement plan and provided guidance on how to allocate his contributions.

• Teamed with their CPA to help Diane form a PLLC for her contracting work.

•  Identified a private banker to be a part of their financial team and to address their credit needs.

1| Remember that no matter what stage of life you are in, a financial plan is more of a compass than a roadmap. As such, it requires constant monitoring and adjustment when events occur that might alter its course.

2| Financial Planning is a verb, not a noun. It’s not a product you are sold, but a professional relationship where open and honest conversations can be held about your hopes, fears and dreams.

3| Your financial planning team should include experienced professionals who have helped other clients walk through many of the same life transitions you will face. With a professional team working with you, no challenge is too difficult and no obstacle too big to overcome.

1| Read the next article in this series.

2| Or, if you are in a young adult phase of your life and could benefit from financial planning or simply need advice on related wealth management strategies, please contact me or any one of our professionals at 800.375.4646. We are ready to help.